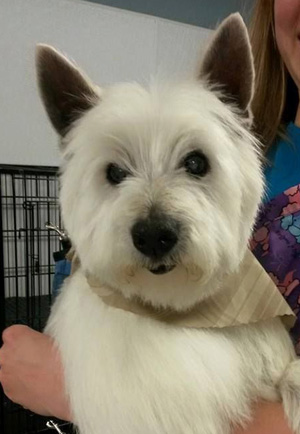 Scottie Joe is a seven-year-old intact former breeding male Westie. Scottie has always been an outside dog who has never been vetted in his life and after he became unwanted by his original owner she advertised him for free in her local newspaper to anyone who would have him as a “good rat dog”. A kind man named Mike answered the ad and upon seeming Scottie Joe, took pity on him. Mike told me that it was clear as soon as he seen him that Scottie Joe was blind and no rat dog which was what he needed, and his skin appeared to be “moving” from the severe flea infestation and he felt “if I just take him home and put him down at least he will be out of his misery.” Mike took Scottie Joe home with that intention in mind but on the ride, Scottie Joe rested his head gratefully on Mikes’s lap. Mike decided to try and help him all he could. Mike is a poor backwoodsman from a tiny town of about 400. He did the best he knew to do for Scottie Joe. He dipped him several times to kill off the flea infestation and bought him the best food he knew Purina Lamb and Rice and kept Scottie Joe inside and in two weeks Mike said Scottie Joe was housebroken. After having Scottie Joe for about six weeks, Mike knew that Scottie Joe had more health needs then he could help him with and searched the internet for help not wanting to put him down since he had become very fond of him. He found Westie Rescue of Missouri. Mike drove a long way to get Scottie Joe to me before our weather turned bad that day in early March and then handed him off to me with tears in his eyes. I promised Mike we would not only take very good care of Scottie Joe but we would keep him updated on his progress and adoption. Scottie Joe has heavy thick cataracts on both eyes and is totally blind. His tongue hangs out because most of his teeth including his front ones are either missing or broken off with just pieces hanging and his lower jaw bone is deteriorating due to the missing teeth. He battles severe reoccurring mouth infections. He tested positive for heartworms and Ehrlichiosis (a tick-borne disease common to this area carried by deer ticks. Can be fatal if not treated causes arthritis and stiffness in the joints left untreated) He was also full of hookworms.  A plan of care was laded out to treat him for the Ehrlichiosis first, then heartworms, then the teeth (which would then resolve the recurring mouth infections) and neutered and then his eyes.  His health recover has been a long journey thus far lasting five months and has been costly, but now we are ready to move onto a very exciting point, restoring Scottie Joe’s sight by the removal of cataracts in both eyes. Scottie Joe will be traveling to Columbia University of Missouri, a three-hour drive always to have his surgery. He has had his initial examination by an Ophthalmologist at the University of Missouri and they feel he is a good candidate for the surgery, but first, he must have a cardiologist consult due to his previous heartworms. If he is cleared by the cardiologist for surgery then Scottie Joe will have his chance to see once again. Scottie Joe is super mellow, very sweet-natured with male and female dogs and every human he meets young or old. After all the neglect and abuse Scottie Joe has endured in his life from humans, he still finds his way to me to rest at my feet and is my constant shadow.

Unfortunately, when more advance testing was done on SJ it was found that his retina was permanently damaged and did not reflect light so his eyesight was not able to be restored.

His heart was so heavily infested with the Heartworms that it has left his right heart chamber permanently damaged but he is now HW negative.

He only has four teeth and those are back molars. He is now also incontinent of the bladder.

SJ is so full of Westietude however. This bouncy happy fellow does not know he is handicapped. He has a big personality and enjoys being the cock of the walk-in our home. He loves his fursisters and he loves me.

How blessed I am! I adopted SJ last August and he is now my Furever puppy. I would be hard-pressed to put into words the love I have for him and count SJ as one of my greatest blessings in life.

Forever thankful to WestieMed for their generous donation for his vetting to get him as healthy as possible so he can have the life that should have been his from the start.