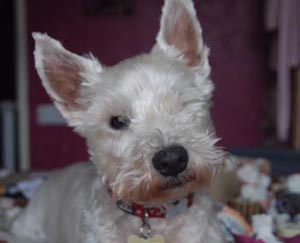 Charlie Bear was found wandering the streets of Denton in Manchester. He had been wandering a while and was hard to catch, because of his fear of humans. The lovely lady that found him couldn’t keep him as she had an elderly and poorly dog herself so he was taken by the dog wardens to Manchester Dogs Home. A worker there soon realized he was a West Highland Terrier with lots of problems. She knew he would struggle in the kennel’s environment as it is very stressful and not the right place for a scared little dog! She contacted a breed-specific rescue on Facebook and I was asked if I wouldn’t mind going and collecting him, fostering him with the view of getting him well and re-homed when the time was right.

When I collected him, I won’t lie he smelled very bad! His fur around his back end was completely matted to his skin with urine and feces. In fact, his fur was matted all over his little body, his skin was terrible underneath and he needed to be completely shaved so we could treat his skin. His ears were completely blocked with infection, fur, and general dirt from being left for so long. He more worryingly had a problem with his left eye, it appeared to be much smaller, very angry looking and had shrunk back into his eye socket. He also had a nasty cough. He was in such a state I rushed him straight to my Vet for a complete assessment.

Charlie Bear had numerous and repeated tests. He was anesthetized and sent for several x-rays, they actually found he had a fracture of his skull and left eye socket! He had suffered a blunt force trauma to the head/face and this had caused his left eye to die. I was advised he would be better off having his eye removed as it was causing him constant pain. A set price was arranged with the rescue group and Charlie Bear had lots attended to while he was asleep. He had his eye removed, both ears completely cleaned, he was castrated, he also had another x-ray to rule out Westie Lung Disease because of his coughing. He doesn’t have WLD thank goodness! Unfortunately Charlie Bear continued to show signs of being unwell, and the rescue decided that his chances of being re-homed were unlikely, I was at this point asked to become his forever foster Mummy. I jumped at the chance to help this little boy flourish as much as he could.

Charlie Bear has sadly developed Epilepsy, his seizures are very distressing to watch, but I do my best to comfort him. They have in recent weeks become worse in severity and length. On a recent Vet visit I was asked again if they could refer him for an MRI scan to try and find a cause, the Vet at the time suspected a brain tumor, which has scared me no end!

I have had to put the Vets off previously because sadly the original rescue that rescued Charlie Bear has now abandoned him and withdrawn his funding. I am now part of a small fundraising group whose main priority is Charlie Bear but we are only very small and cannot cover the whole cost on our own. With WestieMed’s help we will now be able to get Charlie Bear his MRI scan and know what, if anything, we are fighting. Thank you doesn’t seem enough.

I had managed to save enough to take Charlie Bear and his brother on a little holiday to the beach which they loved.

Charlie Bear has had his MRI and spinal tap tests, they thankfully showed no tumor or brain abnormalities. They looked at his spinal fluid and that showed no signs of infection or foreign bodies. The specialist diagnosed Idiopathic Epilepsy but isn’t completely convinced because he doesn’t have a typical seizure pattern or reaction.

He was started on Epiphen tablets but we’ve had to increase these three times now as he’s gone on to develop cluster seizures on top of single seizures. His liver isn’t liking the medication so that is reacting and showing signs of stress. I started him on Milk Thistle hoping it will help but sadly it isn’t. His latest increase has caused major skin problems so we are waiting on a phone call from his Vet, he has developed hive-like spots and is almost ripping his fur out. Despite all this, his personality shines through.

He learned to play but only with certain toys when he wants. He is very loving but also very cheeky! He decided to help himself to the sausages earlier because the door had been left open slightly, but I wouldn’t have him any other way.

Thank you again for the help in getting his tests, without your amazingly kind generosity I’d be struggling to get him diagnosed.