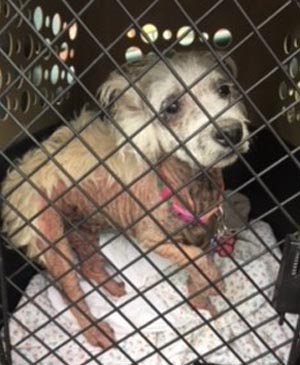 In September I was web surfing and found the Rescue Westies of Missouri site. I filled out an application of interest, since a month before we had lost our previous Westie “Cutty” to cancer, and were missing our little boy. My wife and I had decided we would never have another dog because it was so painful to lose them. Then I received an immediate response that our application was received, but there were not dogs available. I had mentioned in the application we had spent thousands on our precious little boy, because of a congenital heart condition, and we were not ready to handle another Westie with significant issues.  I received a Facebook post of an abused dog that found a forever home, with the caption, “you can’t change the world, but you can change the world for someone”.

Approximately ten minutes after being told there were no dogs available, we received the first picture of JuJu in the cage, sadly we were to find out that she was significantly better in that picture, then when she was found. My wife and I looked at her, and after we quit crying at the sad shape she was in, we called and talked to Sue Hon about this rescue. The hope was she would get better, may grow hair, but was deaf, and there was no one interested in her.

We told her it would be a week before we could drive across Missouri to see her. We set up a time and one week later got to meet JuJu. The rest is history, she was ours, and we promised to change her world, she cuddled up to us and seemed to say, OK let’s go home.

We have had our little girl for two months, the second picture shows her love to watch her iPad, and relax on the porch.

She has had multiple vet visits, medications, and special food. She was referred to a Dermatologist after there was minimal improvement, on a closer exam, and, skin, tissue, and hair analysis, a new care plan was developed.

It will be a long road for her, at least a year of medications, three times a week shots, special shampoo baths, and a strict special food diet.  BUT the good news is she is showing some improvement, all open areas of skin are closed and healed, she seems happy with us, and is completely comfortable taking over the entire king-sized bed we sleep in.

Our lives are better because she is in it, our first Christmas will be special. Life is what happens after we make our plans, next year will she have hair, be beautiful, and forget what had happened to her, I don’t know the future but she knows we are hers and we love her.

It is good to hear from you, and that you remember our little girl JuJu. It has been a long struggle with some successes, since October when we adopted her. I think the best way to say it is, two steps forward and one step backward. She continues to get significant swelling in her feet, she has one spot on each foot and the base of her tail that she will attack and still chew and lick raw. She continues to get recurring ear infections.

Now the good news, she is down to just weekly allergy shots, they had hoped it would be only every other week, or be done with shots by now. They are thinking she will never be able to stop them. We are transitioning her into nonprescription food, god love her she is so spoiled with daily deli-sliced meat and scrambled eggs, we joke that when it is time to start, the hair/coat diet she will turn her nose up at it. The positive side is that digestive wise she tolerates the change. All her skin cultures are returning negative, which means all the yeast, staph, MRSA infections are gone, and all her skin is intact with no open areas. Her ear infections are less frequent and she actually had periods when both ears are clear and healthy.

The Dermatologist and the two vets that care for her, feel that her allergies are what continues to be the underlying problem, and it may a full year of the continued treatment and shots before it is completely under control.

Her hair has filled out well on top and neck, and portions of each leg and feet have filled out some, but her belly remains pretty bald, with little fuzz developing, they are not sure due to the skin damage if she will ever get hair in those areas. We have the most incredible dog groomer that hand trims her, to make her look as much like a Westie as possible.

Being deaf, she can’t hear when we tell her how much we love her, but she does allow us on our king-sized bed at night and she has learned to share our pillows with us. She loves to go on walks, has developed a friendship with a neighbor Westie (Phoebe) and a Corgi (Wally). She finally has started to smile from time to time and not have such a sad look as she did for so long. She will let you hug and hold her for hours on end if she has finished her napping. When we take care of the grandkids when they are ill she always sits by them and watches over them the whole time they are here.

The Dermatologist thanks us for being so diligent with her. She claims to be putting her daughter through college on our fees, always happy to support higher education. We are blessed that all the people working with her are as caring and concerned for her as we are. Truly we had hoped she would be this beautiful healthy white Westie by now, but that dream is still some time in the future.